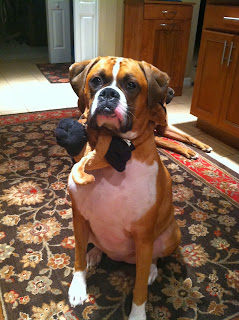 This past year has been full of challenges for my little Lucy Lou.  There is something about Florida that makes her itchy and scratchy all over- I am quite sorry to say.  We made several trips to see a dermatologist, with absolutely no positive results.  (Which was very good for emptying out Lucy's piggy bank, but not much else.) After 3 months of very expensive medications, and lots of frustration,  we went back to our regular vet (have I mentioned that both of my kids love their new vet?) for a very long consultation.  Our solution was somewhat out of the box, and not necessarily the solution that I was hoping for, but Lucy is comfortable, and that's really all that matters.  I just want a happy dog, with as little long term harm to her body as possible.  After months of being covered in a staph infection, and being itchy almost 24 hours a day, Lucy is hardly itching at all... And that's all I can hope for.

I am highly suspicious that the tough Florida grass is partly to blame for Lucy's allergies, although I'm sure there are other things to blame well.  We have discovered that scrambled eggs, make her break out in hives- not boiled eggs though.  (I'm still scratching my head on that one!) 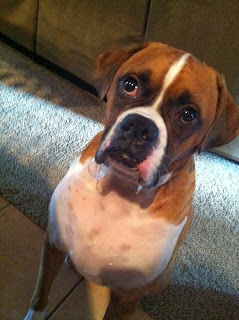 Lucy is as charming as ever, although I must say it is becoming quite evident that my little girl is no longer a puppy.  Just last week, circumstances beyond our control meant that Lucy spent the day free from her kennel.  I worried the whole way home about what mischief might have found Lucy... or what mischief Lucy might have found!  But, no need to worry, no mischief found Lucy that day.  As much as it saddens me that my baby boxer is obviously not a baby anymore, I'm so proud of her!  Being able to be free in the house is a big step, and one that she's obviously earned.  Since that day, I've left her twice, with no problems when I returned home.

While Lucy is still prone to moments of boxer silliness, she is really becoming quite a little lady... if you consider drooling to the point of making bubbles ladylike, that is!  I will say that this little boxer has an intense sense of smell, and she most certainly loves her pizza! 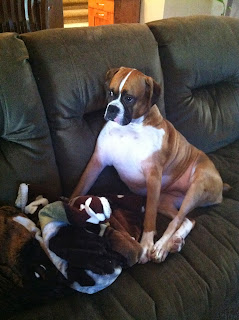 One of the things that I've grown to appreciate the most about this new grown up Lucy is how calm, peaceful and reflective she can be.  One of her new favorite past times is watching tv.  She can sit for hours on the couch just watching, I'm starting to think she really understands what they're saying!  I wonder if she things they're talking to her?

Earlier this week, she sat on the sofa listening to CNN and the talk of the government shutdown negotiations... I swear she was madder than a hornet, but maybe that was just my imagination.  I know that there were plenty of boxer sighs.

Many mornings, I will grab a cup of coffee and pull up a seat next to her on the sofa.  I love sitting there with her!  Once I sit down, she'll move around until she's as close to me as she can possibly be without sitting on top of me!  And of course, I take advantage of the opportunity to plant lots of little kisses on top of that soft little boxer head!  I just can't resist her... 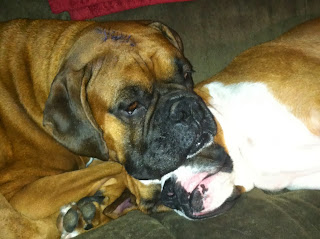 As I mentioned yesterday in my "Duke" posting, Lucy has been a very good nurse maid to her "wounded" big brother.  They certainly do love each other, who could ever believe that they haven't been together their whole lives?  They're like two peas in a pod...

This picture was taken earlier this week, Lucy was more than willing to let Duke use her head as a pillow.  It was one of those moments when I felt blessed to have had my camera handy!  I wouldn't have wanted to miss this shot.

Posted by Marianne Pysh at 3:05 PM 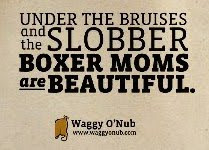